Promising Pyrolysis: From Waste back to Oil

How can we reduce waste and make oil at the same time? Here is an introduction to a promising technology that may solve both problems by turning waste into oil: Pyrolysis.

Recently Daniel Beltrá, a conservation photographer, exhibited his latest work at Roca’s Gallery in Barcelona (Madrid and Chicago are next). It consists of some beautiful but devastating pictures about the effects of the Macondo blowout in the Gulf of Mexico. 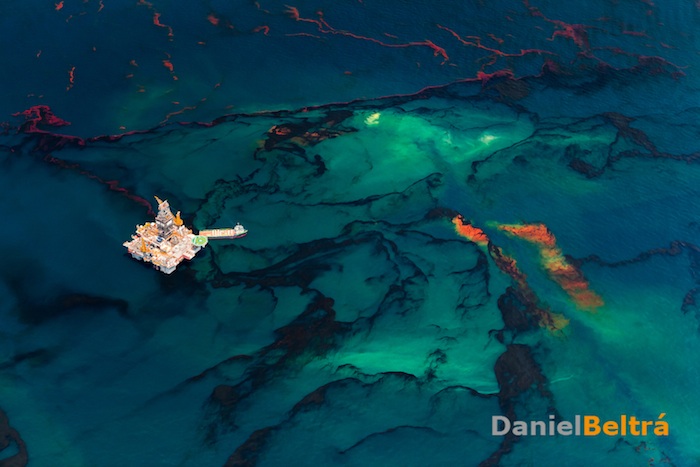 Aerial views of the oil that still leaks from the Deepwater Horizon wellhead. The BP leased oil platform exploded on April 20 2010 and sank after burning. Photo Â© Daniel Beltra/Greenpeace

In all kinds of ways we continue introducing more carbon into our environment, instead of using the hydrocarbons and its derivatives that are already made available. It seems we prefer to drill for more -under riskier conditions- while generating enormous amounts of waste and eventually larger carbon footprints.

Plastics for example are one of the main applications from the petrochemical industry. A versatile and genius material playing a major role in every consumer’s daily life, but a tremendous burden in terms of waste management. Therefore we should reconsider the idea of the plastic consumer and instead become a plastic user. In this C2C context, I’d like to make you more familiar with a relatively unknown technological solution called pyrolysis.

Combustion without oxygen is a popular way of describing the principle of pyrolysis. Basically the process leads to smaller molecules (like oil, gas, char and/or minerals) by means of thermochemical decomposition in an airtight reactor vessel. Depending on the feedstock and type of pyrolysis (slow/fast/flash) it can result in different product compositions, however the preferred main component is a liquid mixture of carbohydrates known as pyrolysis oil (or bio-oil when using biomass as a feedstock). Below an example of a typical pyrolysis process from the University of Edinburgh: 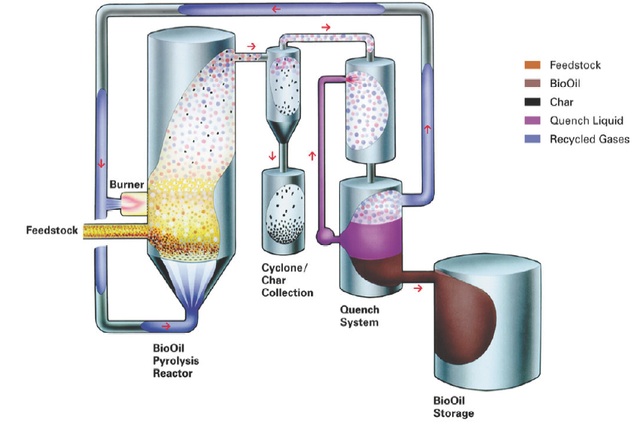 Schematic visualisation of the pyrolysis process by the University of Edinburgh

The process may be easier to imagine on a lab scale as this short clip shows the conversion of (wood) waste into biochar and after condensation into oil and gas.

Besides that the process can be self-sustaining, eliminate waste and generate renewable energy there’s another important advantage with this technology; which is its independency of fossil fuels however at the same time its compatibility with our current downstream petrochemical infrastructure. This compatibility is reflected in several aspects such as:

As mentioned briefly before biomass, so of non-synthetic waste, can also be pyrolysed. Today’s “business-as-usual” is biomass such as organic waste from municipalities or the agricultural industry either being used as fertilizer, digested (sometimes to biogas) or incinerated, generating occasionally some green electricity or heat. Consequently although some of its energy potential is captured and utilised, the majority is lost and releasing CO2 or (even worse) methane into the atmosphere. We could achieve much higher energy efficiency rates via the pyrolysis route than the current conversion techniques especially with the drier types of biomass.

Additionally, the types of biomass used for these so-called 2nd generation biofuels are exclusively agricultural residues: A sustainable way of reducing organic waste while staying away from the ‘Food vs. Fuel’ debate…

Jens is a senior chemical engineer (MSc) based in Barcelona at Alucha Recycling Technologies, focussing on the innovation and development of new pyrolysis applications.