Building an Eco-Toilet and Library in Palomino, Colombia

Students from University Javeriana directed by Christiaan Job Nieman, Carlos Hernandez, Cesar Ramirez and Antonio Yemail. Zuloark, Spain are Building a Society in Palomino, Guajira in Colombia. They just finished building a library and eco-toilet with local materials only. 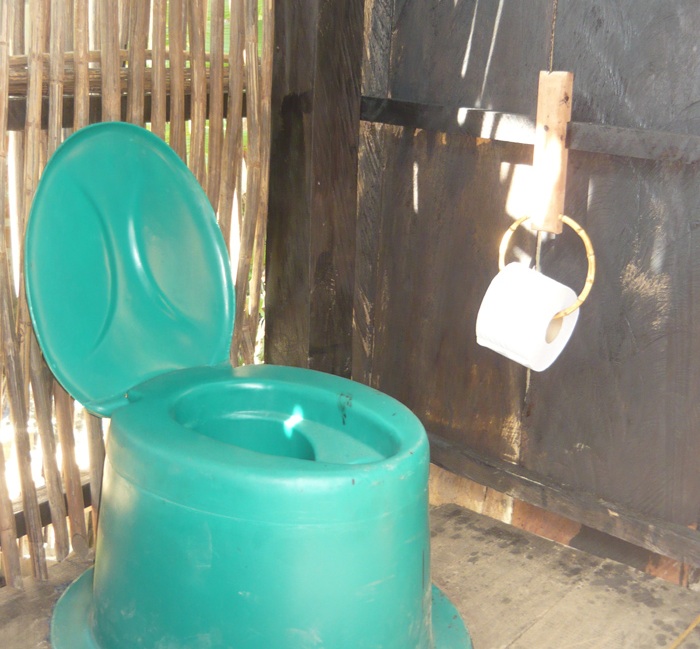 The eco-toilet in Palomino. Separating the solid from the fluid waste it prevents odors and facilitates composting, and it uses no water.

A new project has been built as part of the course “New Territories” for architecture and industrial design students of the Universidad Javeriana in Bogotá, Colombia. The coastal village of Palomino near the Sierra Nevada de Santa Marta has been the focus of different student projects in the last two years, that vary from organizing a football tournament or naming the streets, to the building of different structures to promote cultural activities and waterless/compost toilets for the awareness on health issues. In these interventions we try not only to build physical objects and buildings, but to help build the community on different levels. The idea is to do this with local knowledge, people and materials. The two week visits are spend first “harvest mapping” to identify these resources, and then acting with that information to build something for the community. 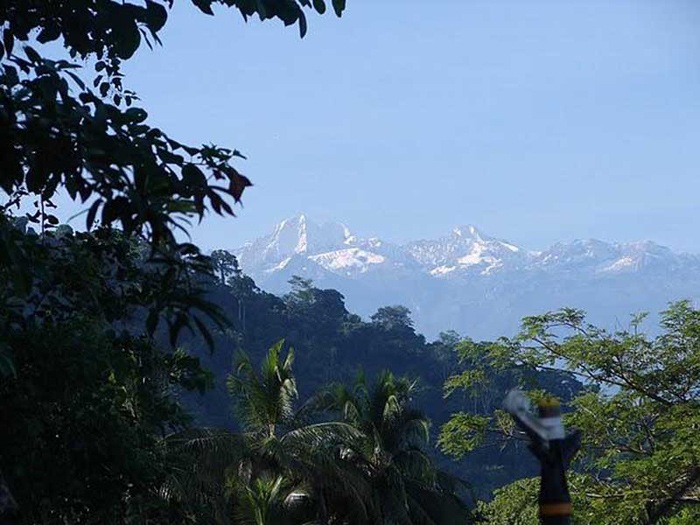 The Sierra Nevada de Santa Marta, as seen from Palomino. It rises 5.775 meters only 42 km from the Caribbean coast. Unique geographic and ecological conditions.

Palomino is a strategically positioned village between the Sierra Nevada de Santa Marta and the coast, and on the road that connects two mayor cities of the north of Colombia. Palomino has endured many years of violence, and has a mixed ethnical population with clear segregation within it’s just over 3000 inhabitants. The Kogui indian tribe that lives in the Palomino area of the Sierra Nevada and their ancestral culture is very present in the area, but the town itself is inhabited by the different “colonos” who are from all over.
The situation of most inhabitants is of poverty, and they have little access to services provided by the government. Almost no access to drinking water, very poor communication networks and insufficient garbage management.
A very colorful and diverse cultural background in music, dance and traditions is the basis of the work done by the students, focussing on the cultural activities of the children. 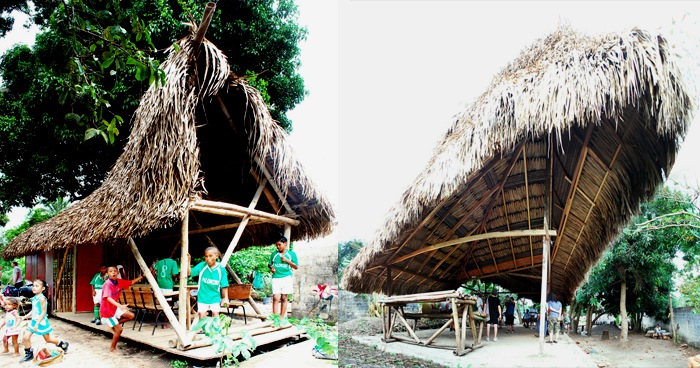 The sports office and culture house, built in previous trips to Palomino

In earlier visits the students have build a Cultural Center, and a Sports Office, each with their own eco-toilet. In this last visit the students diagnosed the results of these projects after 6 months of use. One of the conclusions is that the maintenance of these projects is difficult, as they are on community (public) property, and the leaders of the community have little motivation to manage them. There is no financial benefit for them, and realistically it’s understandable that their priority is on paid work rather than cleaning public toilets for free.

This led the group to decide to build a new eco-toilet on a privately owned lot, to guarantee that it will be maintained by it’s owners. The place chosen was the home of Chamaco and Gilma, because they open their home to more than 70 children each day to serve them lunch donated by government institutions. This makes the toilet have a public use after all, benefitting the children which is always our focus group. 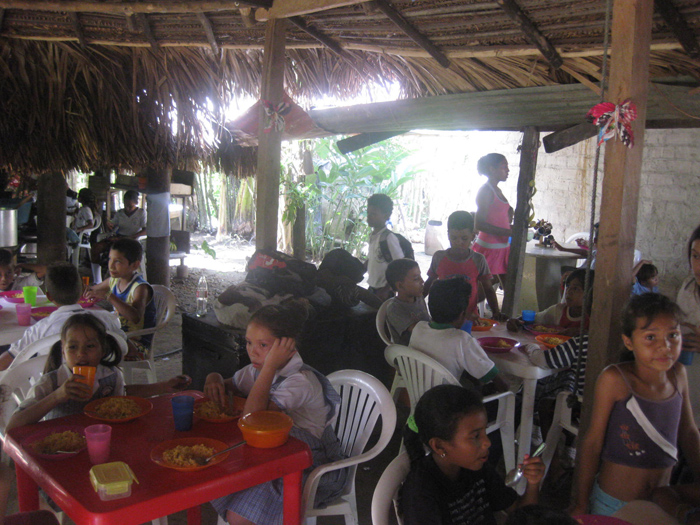 The children of Palomino receiving their lunch in the home of Gilma and Chamaco. They are the users of the library/toilet.

The concept always has been that to make the eco-toilet effective it should include another function, so this time it became a Library/Eco-toilet. 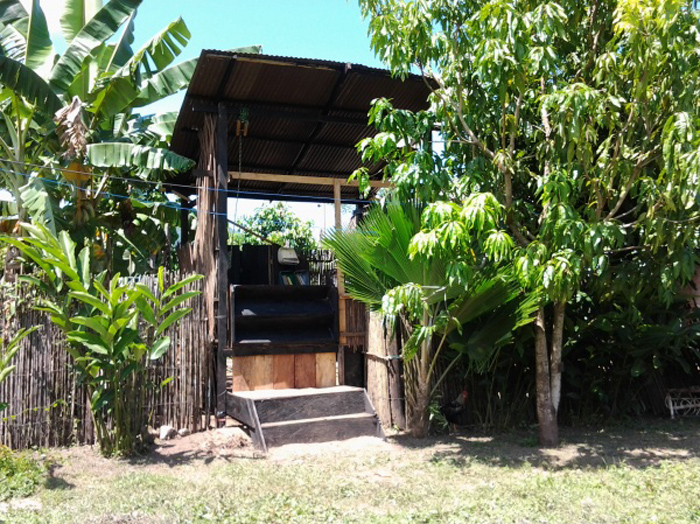 Retractable staircase as public entrance to the library/toilet. A very interesting way of creating ambiguity on the border between public and private.

The entrance is a staircase/door with counterweight to open and close facing the local football field, as a border between public and private use, as well as an internal entrance from the lunchroom. Built out of wood bought from neighbors, it has a roof that collects rain, because water is another scarce resource. It has a small library with donated books on shelves made out of re-used plastic containers, and of course it has a composting toilet system (one potty and two urinals). 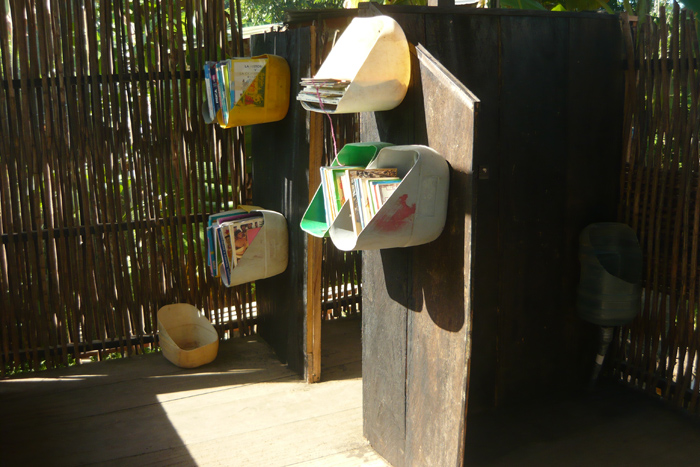 Library made out of reused plastic containers. When more books arrive it can be expanded. 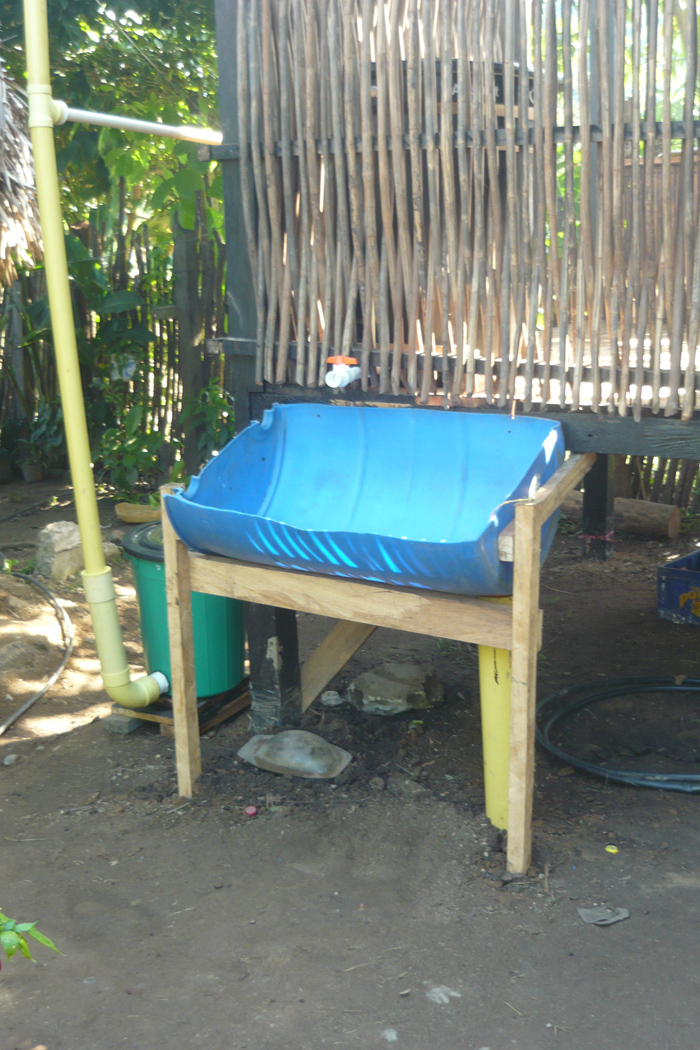 Rainwater collection system. Water is used by children to wash their hands before lunch, and the dishes afterwards.

Christiaan Job Nieman is a Dutch designer living in Bogotá, Colombia. He works as a design teacher at various universities next to his independent projects, where he focuses on sustainability and social innovation in product design, architecture and urbanism.